A common thread through the Tektronix OM-series coherent optical products is the OM1106 Optical Modulation Analysis (OMA) Software. This software is included with all Tektronix OM4000-series optical modulation analyzers and is also available as a stand-alone software package for customers to use with their own optical analyzers or as a coherent optical research tool.

The OMA software consists of a number of major building blocks. At the heart of the software is a complete library of analysis algorithms. These algorithms have not been re-purposed from the wireless communications world: they are specifically designed for coherent optical analysis, executed in a customer-supplied MATLAB installation.

Flexibility is a key strength of the OM1106 software. You can take measurements solely through the OMA software user interface, you can use the programmatic interface to and from MATLAB for customized processing, or you can do both by using the OMA software as a visualization and measurement framework around which you build your own custom processing.

Software version 3.0 introduces a new multi-OMA software architecture where all operations can be applied across multiple OMAs. This is an ideal solution for multi-mode MIMO research or work on multi-channel systems requiring simultaneous data acquisition. 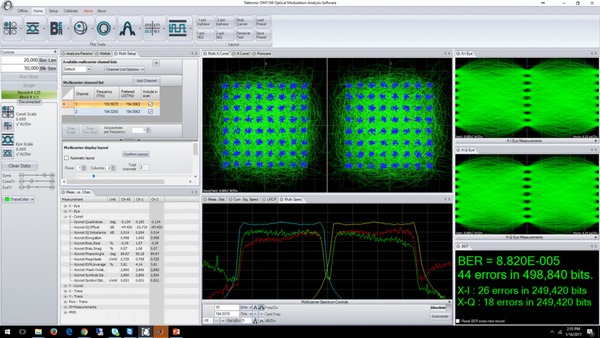 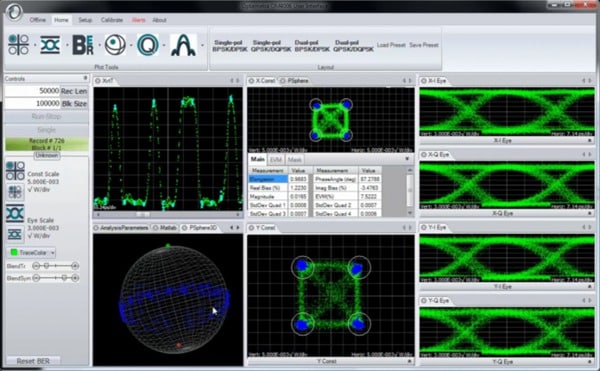 The OMA software lets you easily configure and display your measurements and also provides software control for customer test automation using WCF or .NET communication. The software can also be controlled from MATLAB or LabVIEW.

The following image shows a QAM measurement setup. The plots can be moved, docked, or resized within the application work space or into separate windows on the desktop. You can display or close plots to show just the information you need. 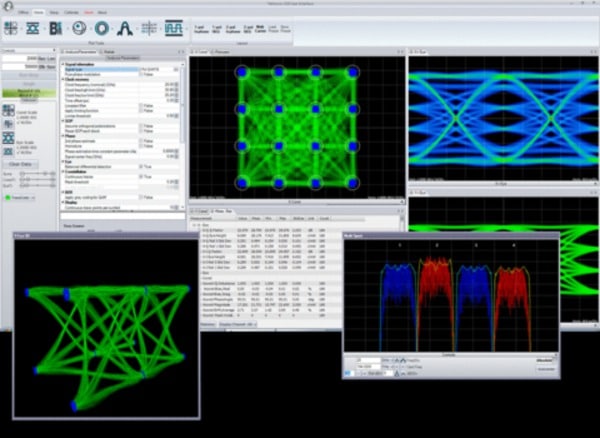 QAM measurements on the OMA software.

In addition to the numerical measurements provided on individual plots, the Measurements tab provides a summary of all numeric measurements, including statistics. 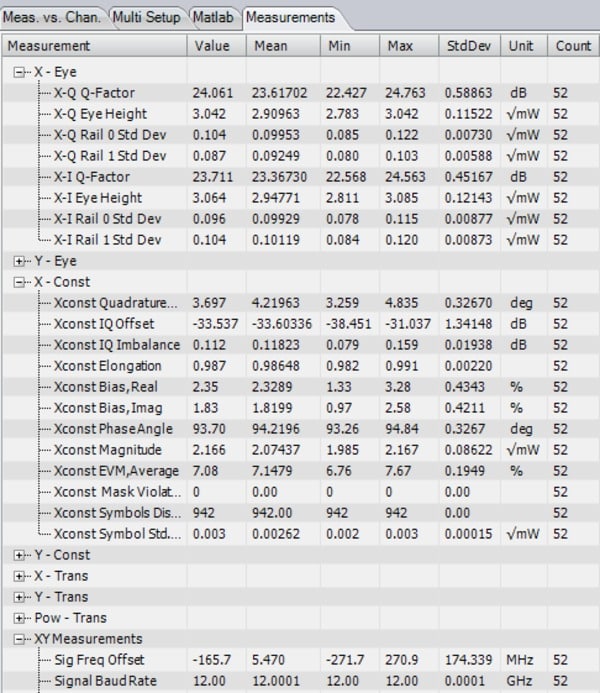 The Tektronix OM1106 software is designed to collect data from the oscilloscope and move it into the MATLAB workspace with extreme speed to provide the maximum data refresh rate. The data is then processed in MATLAB to extract and display the resulting measurements.

Since 100% of the data processing occurs in MATLAB, test engineers can easily probe into the processing to understand each step along the way. R&D labs can also take advantage of the tight MATLAB integration by writing their own MATLAB algorithms for new techniques under development.

Use the optimum algorithm

Don’t worry about which algorithm to use. When you select a signal type in the Tektronix OM1106 software (for example, PM-QPSK), the application applies the optimal algorithm for that signal type to the acquired data. Each signal type has a specially designed signal processing approach optimized for that signal. This means that you get results right away.

Signal processing algorithms designed for electrical wireless signals don’t always work well with the much noisier sources used for complex optical modulation signals. Our robust signal processing methods tolerate enough phase noise to make it possible to test signals that would traditionally be measured by differential or direct detection such as DQPSK.

Q-plots are a great way to get a handle on your data signal quality. Numerous BER measurements versus decision threshold are made on the signal after each data acquisition. Plotting BER versus decision threshold shows the noise properties of the signal. Gaussian noise will produce a straight line on the Q-plot. The optimum decision threshold and extrapolated BER are also calculated. This gives you two BER values: the actual counted errors divided by the number of bits counted, as well as the extrapolated BER for use when the BER is too low to measure quickly. 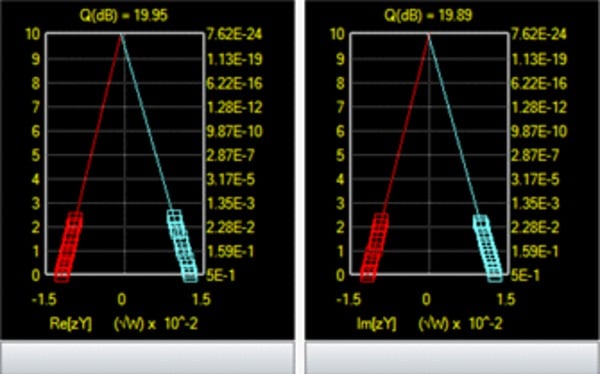 Once the laser phase and frequency fluctuations are removed, the resulting electric field can be plotted in the complex plane. When only the values at the symbol centers are plotted, this is called a Constellation Diagram. When continuous traces are also shown in the complex plane, this is often called a Phase Diagram. Since the continuous traces can be turned on or off, we refer to both as the Constellation Diagram.

The scatter of the symbol points indicates how close the modulation is to ideal. The symbol points spread out due to additive noise, transmitter eye closure, or fiber impairments. The scatter can be measured by symbol standard deviation, error vector magnitude, or mask violations. 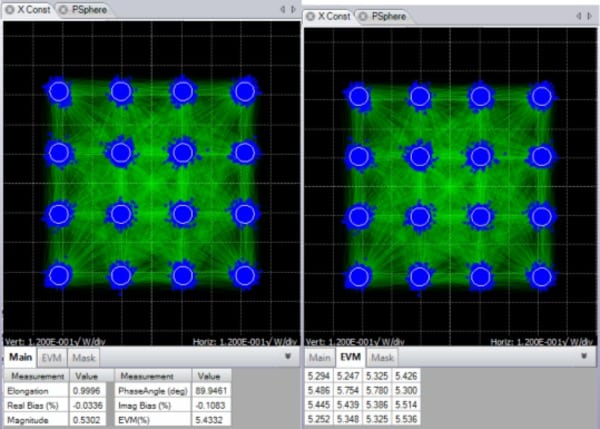 The Color Grade feature provides an infinite persistence plot where the frequency of occurrence of a point on the plot is indicated by its color. This mode helps reveal patterns not readily apparent in monochrome. Note that the lower constellation groups of the example below have higher EVM than the top groups. In most cases this indicates that the quadrature modulator bias was too far toward the positive rail. This is not evident from the crossing points which are approximately correct. In this case an improperly biased modulator is concealing an improperly biased driver amp. 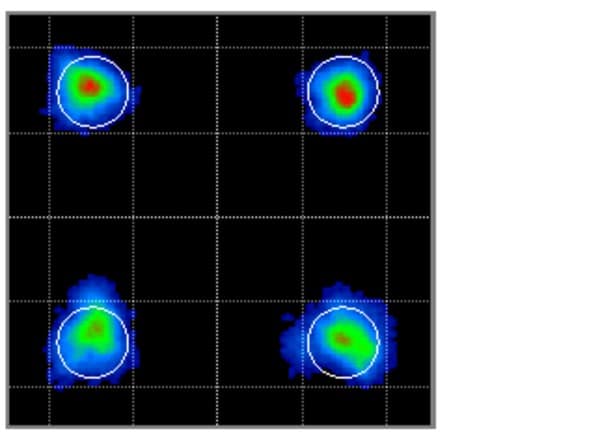 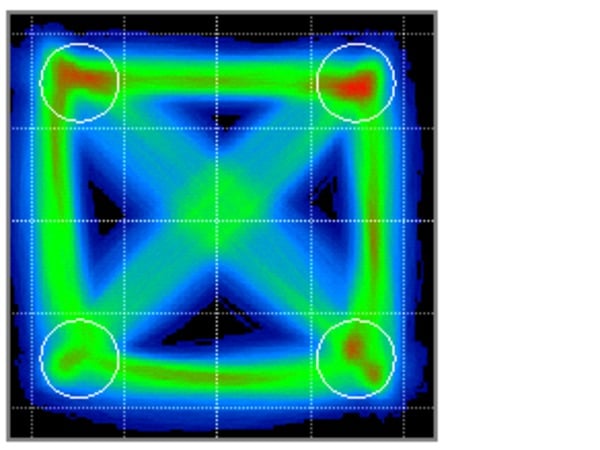 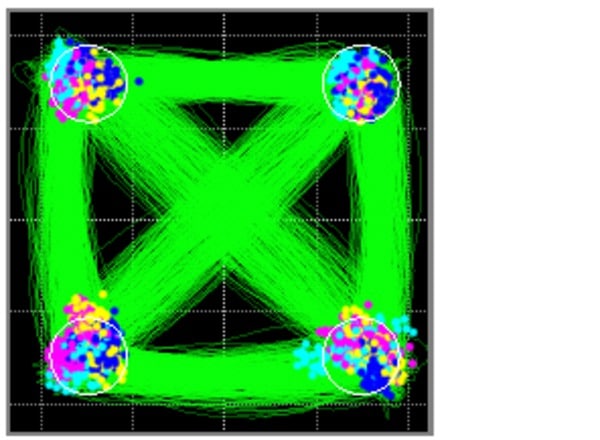 In the case of multilevel signals, the above measurements are listed in the order of the corresponding eye openings in the plot. The top row values correspond to the top-most eye opening.

The above functions involving Q-factor use the decision threshold method described in the paper by Bergano1. When the number of bit errors in the measurement interval is small, as is often the case, the Q-factor derived from the bit error rate may not be an accurate measure of the signal quality. However, the decision threshold Q-factor is accurate because it is based on all the signal values, not just those that cross a defined boundary.

In addition to the eye diagram, it is often important to view signals versus time. For example, it is instructive to see what the field values were doing in the vicinity of a bit error. All of the plots that display symbol-center values will indicate if that symbol errors by coloring the point red (assuming that the data is synchronized to the indicated pattern). The Measurement versus Time plot is particularly useful to distinguish errors due to noise, pattern dependence, or pattern errors.