Never let a lack of channels slow down your verification and debug process again!

Most engineers can recall situations in which they were debugging a particularly difficult problem and wanted greater system visibility and context, but the scope they were using was limited to two or four analog channels. Using a second scope involves significant effort to align trigger points, difficulty in determining timing relationships across the two displays, and documentation challenges. 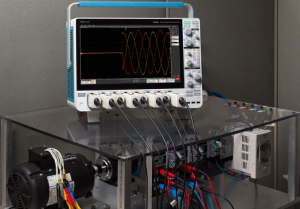 The 5 Series MSO redefines what a Mixed Signal Oscilloscope (MSO) should be. FlexChannel technology enables each channel input to be used as a single analog channel, eight digital logic inputs (with the TLP058 logic probe), or simultaneous analog and spectrum views with independent acquisition controls for each domain. Imagine the flexibility and configurability this provides.

With an eight FlexChannel model, you can configure the instrument to look at eight analog and zero digital signals. Or seven analog and eight digital. Or six analog and 16 digital, five analog and 24 digital and so on. You can change the configuration at any time by simply adding or removing TLP058 logic probes, so you always have the right number of digital channels. 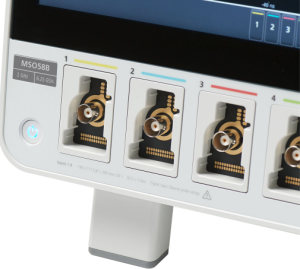 Use the following steps to select the appropriate instrument and options for your measurement needs.

Add optional serial bus triggering, decode, and search capabilities
Choose the serial support you need today by choosing from these serial analysis options. You can upgrade later by purchasing an upgrade kit.
Differential serial bus? Be sure to check Step 7 for differential probes.

1USB high-speed supported only on models with ≥1 GHz bandwidth

Add digital probes
Eight digital channels can be accessed on any FlexChannel simply by ordering a TLP058 logic probe, either with the instrument or separately.

1Recommended for connecting your existing TekProbe probes to the 5 Series MSO.